How Rotterdam is banning cars to create more public space

It is no secret that when I am not travelling, I enjoy being in my hometown Rotterdam. The second largest city of the Netherlands is an upcoming gay travel destination, and for sure the city makes an effort to impress visitors in creative and fun ways.

I  won’t have to tell you why Rotterdam is the coolest city in The Netherlands. Lonely Planet, Rough Guide, The New York Times and (BBC) already did. Ok, maybe you want to read Why tourists love Rotterdam (and the Dutch don’t understand).

But lately the city has been putting a lot of effort in making the city more enjoyable. For a long time Rotterdam was known for it’s great infrastructure as a result of being built up again after being severely bombed during WWII. Cars could easily go around the city, but for bike riding Dutchies the polluting cars are not a real treat. And Rotterdam is coming out to the rescue, in creative ways.

This is one of the coolest ways Rotterdam is banning cars. They simply give every restaurant or bar a permit to expand their business from spring to fall. One or two parking spots on the streets are converted into terraces and a lot of bars do their best to make it the coolest places to hang out.  Even the best hamburger restaurant has a terrace now! 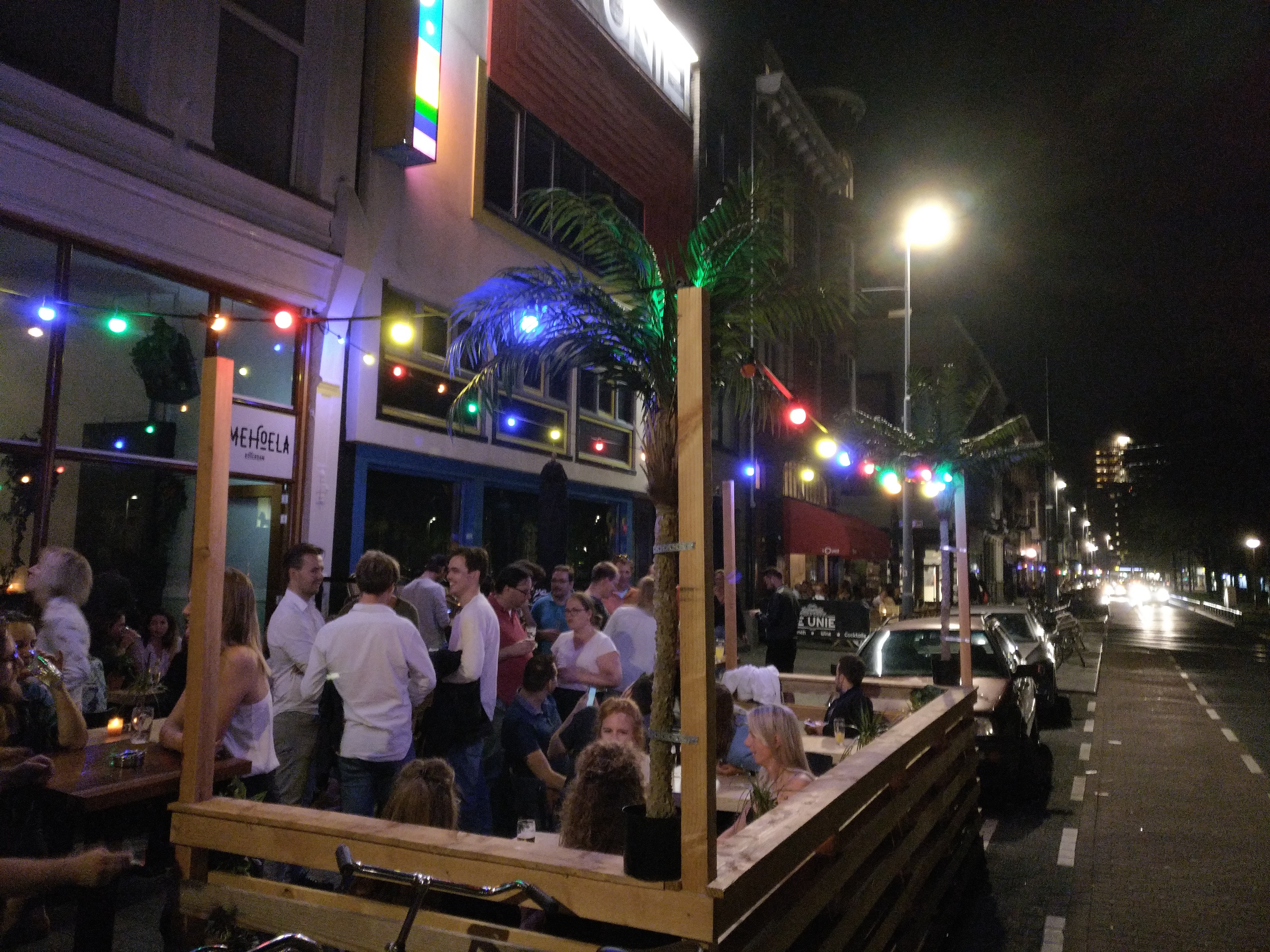 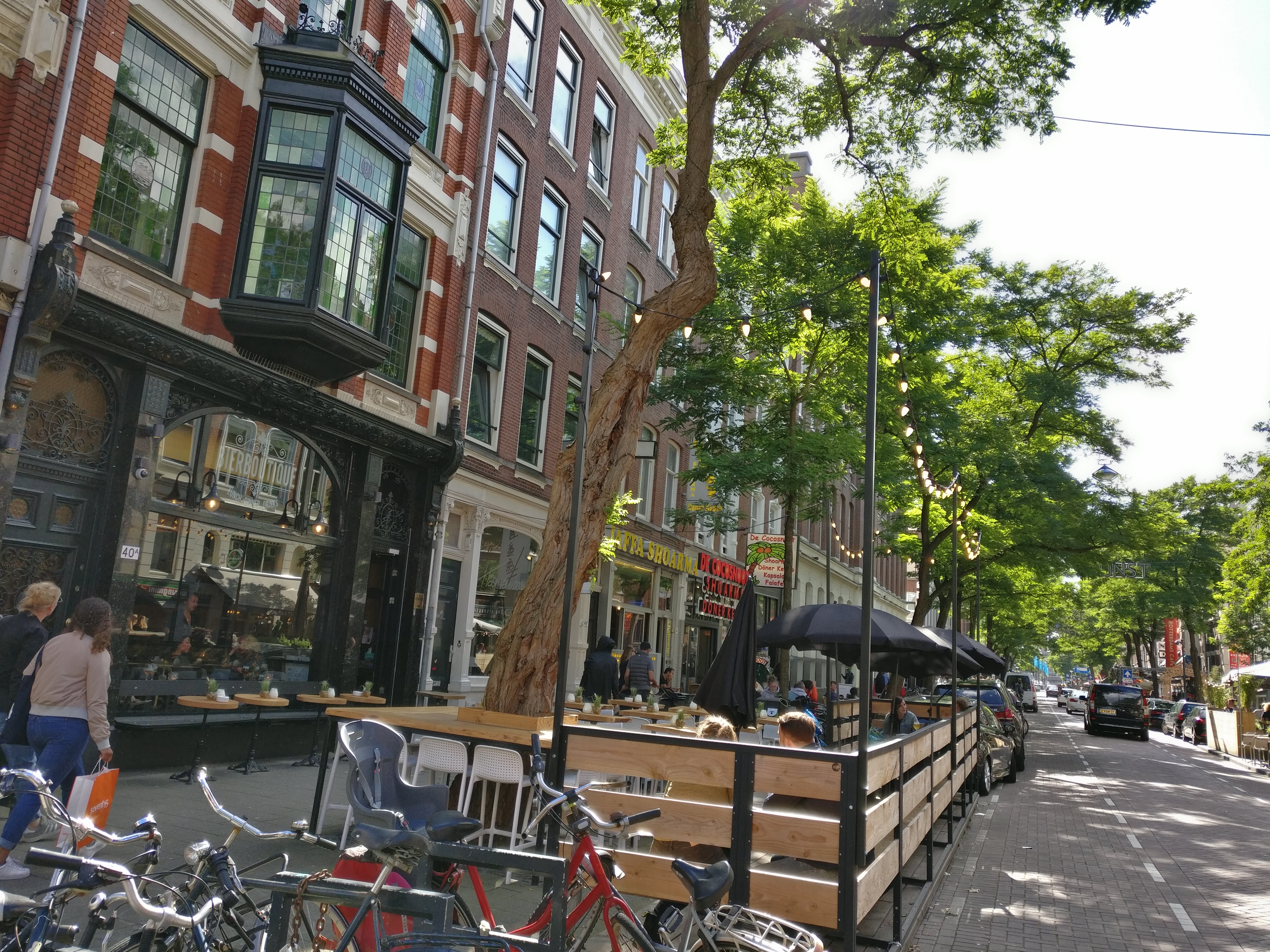 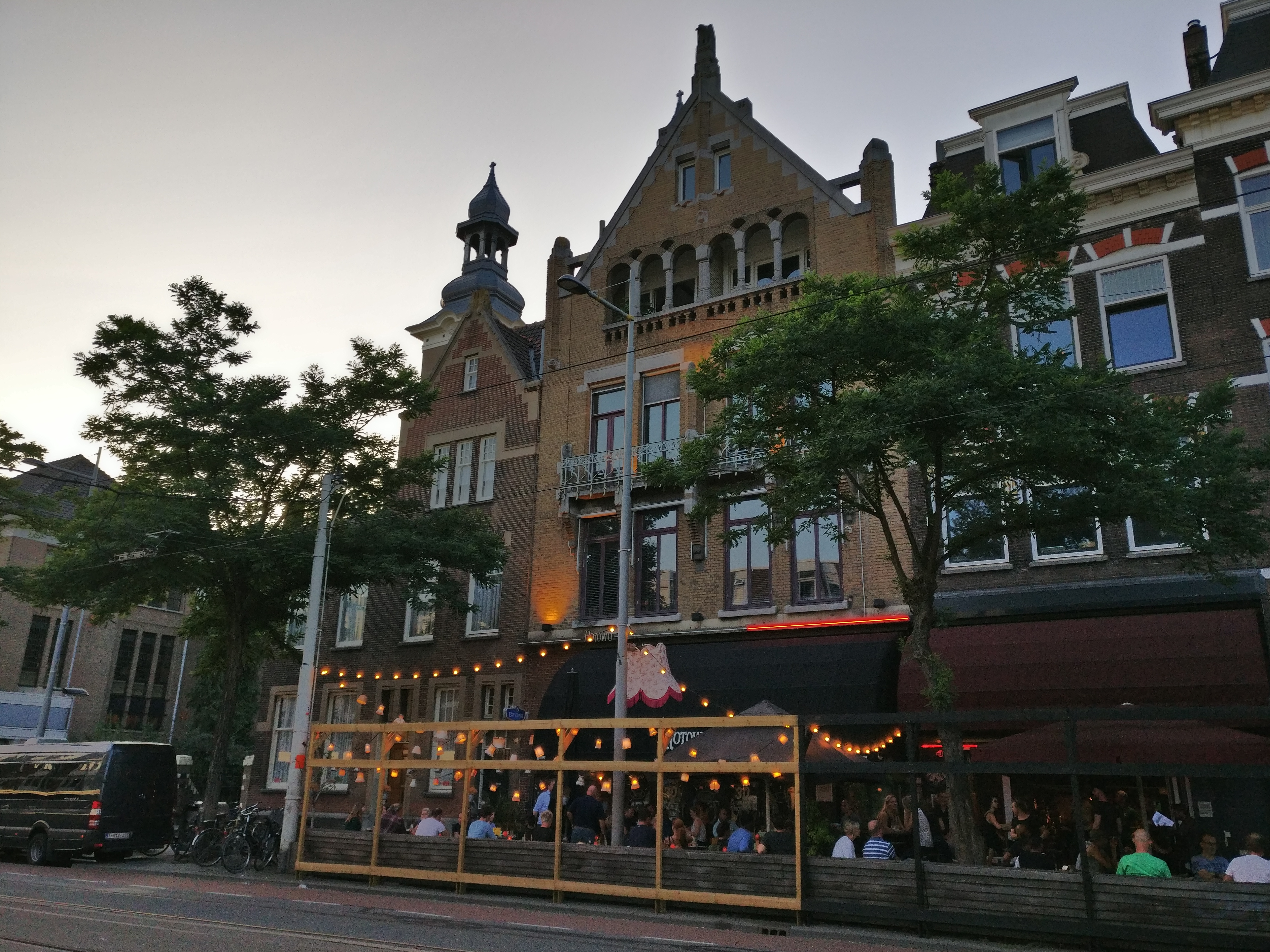 Reducing CO2 can be hard with so many parking lots in the city: it’s just an invitation to drive. But to make the parking garages more attractive to look at, Rotterdam created a lot of green parking lots. They help cleaning the air a bit, but they also turn boring concrete structures into urban jungles. 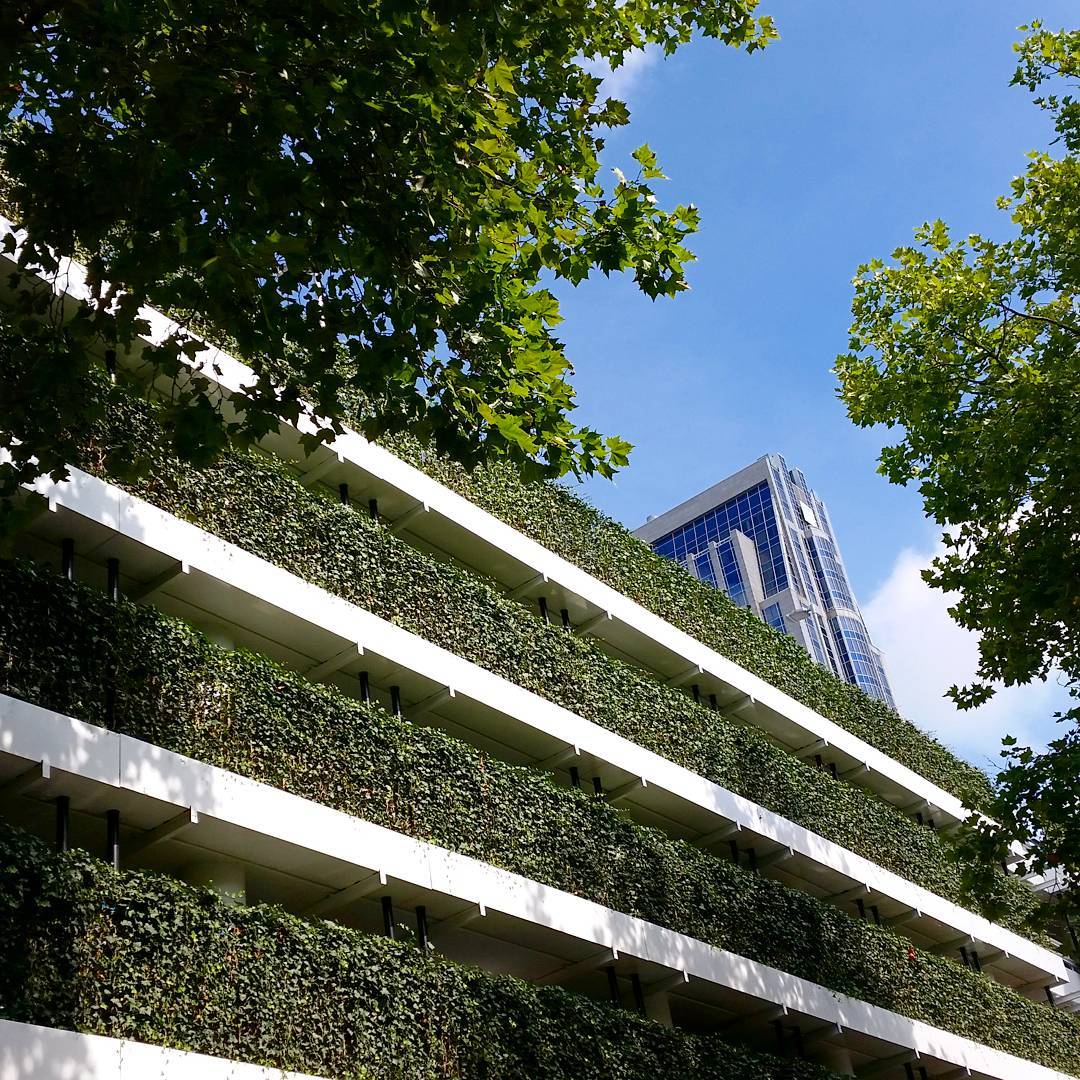 The most central parking garage near the popular WittedeWith-straat, is not only green. Its roof becomes a popular rooftop club during summer. You can tell that Rotterdam is making an effort to make to most fun out of parking space.

There is even a complete shoppingmall with parking garage of which the roof became a complete park. Now that is a great way to shop and stroll! 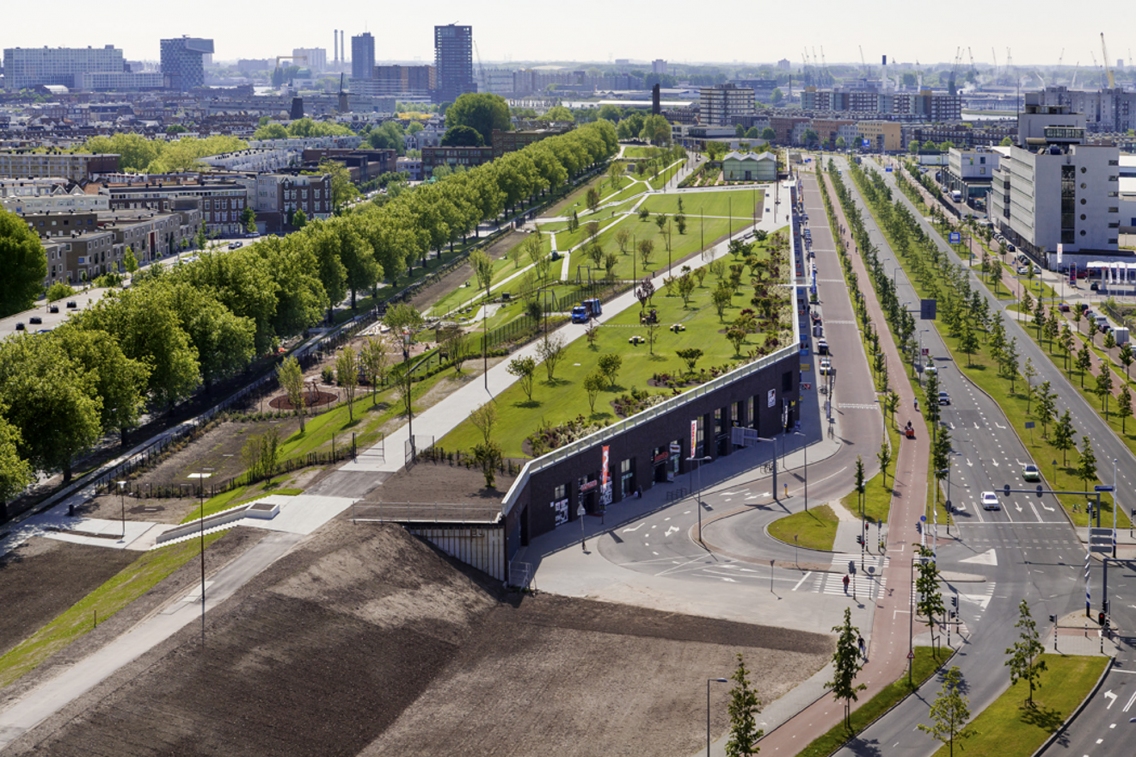 The mall with a rooftop park

When you arrive in Rotterdam by train (or bus from the Airport), you will see large pedestrian promenade to enter the city. While you walk and watch people relaxing on the grass, you won’t notice what’s going on a few meters below your feet.

Underneath the promenade is a large bicycle parking, a large parking garage and even an underground roundabout to let cars drive to another underground parking lot. The roof of that one is the Schouwburgplein (Theatresquare), which is a popular event area. 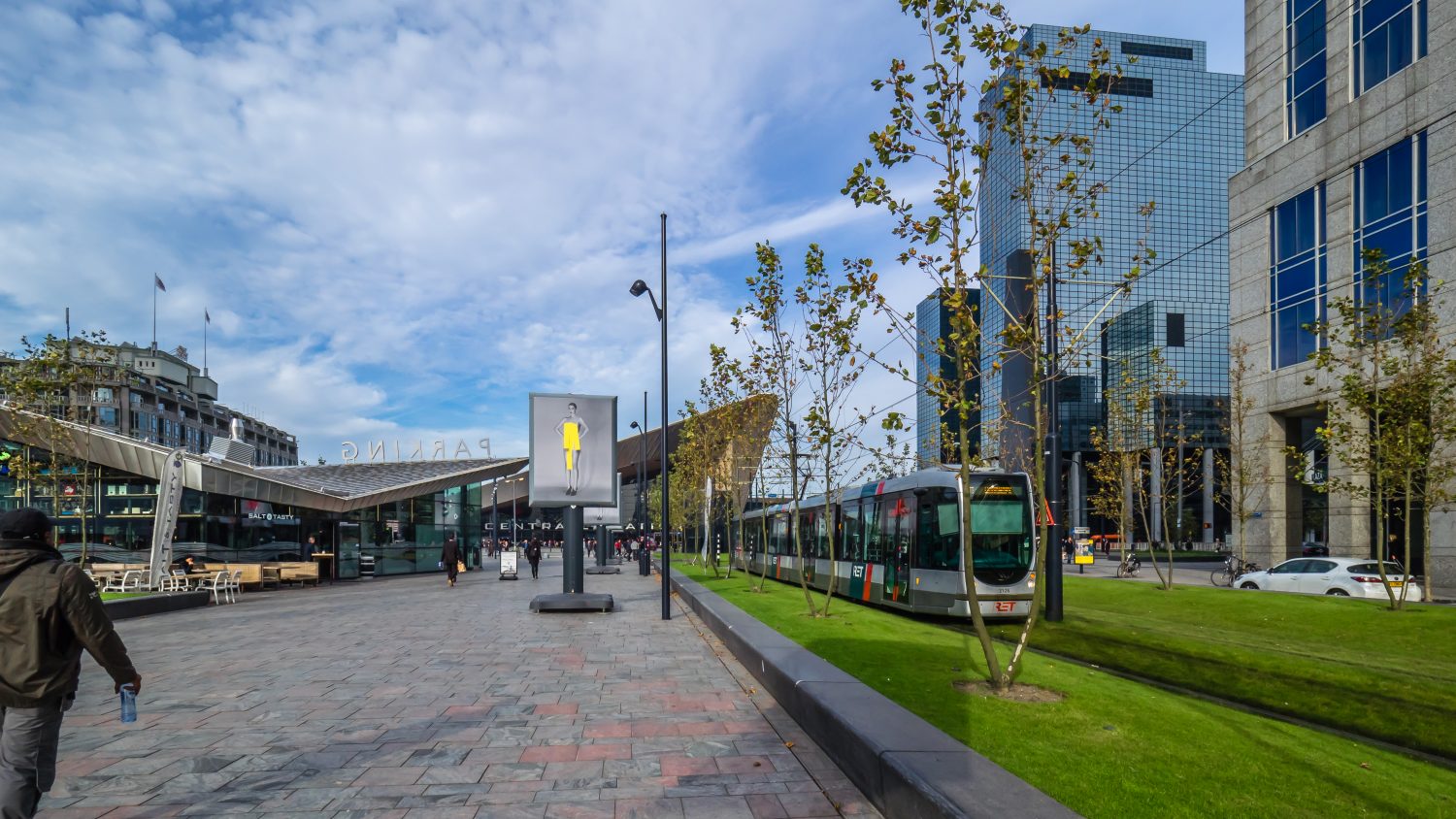 Rotterdam has upgraded to look of the downtown area with a very well thought out plan to renovate streets. It is named De Rotterdamse Stijl (The Rotterdam Style) and it makes sure that only one side of the street is used for car parking spots. The other side of the streets is being used for trees and bicycle parking. And you’ll see that there are enough parking spots reserved for car sharing and electric cars (including charging devices). 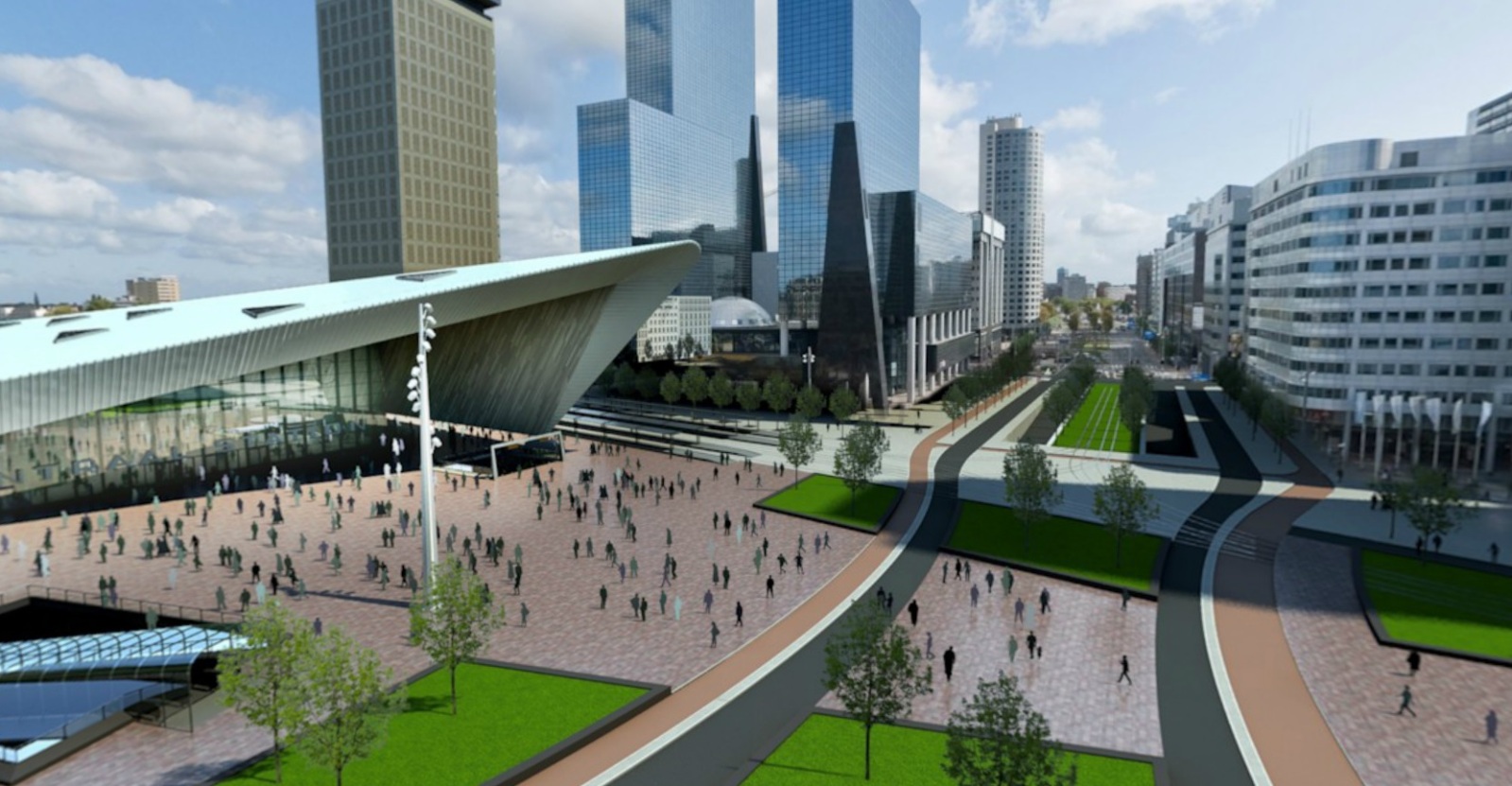 Not much fun, but at least a large impact on the traffic in the city, was the introduction of the environmental zone. Heavy trucks and old (polluting) cars are banned from the city center. No extra taxes, but a complete ban! That means that if old cars or trucks are driving into the city, they will get a penalty of € 230,- each time they enter the city.

Want to explore the city in a typical Dutch way? Hop on an O-bike, which you can find anywhere in the city. You won’t have to put it back in a particular place, just leave it at your destination, lock it, and you’re done. Because of the built in GPS and Bluetooth, the bikes are a bit tough to ride, but a bit of exercise is very welcome in the city that has a lot of nice restaurants.

More inspiration and reasons to travel to Rotterdam