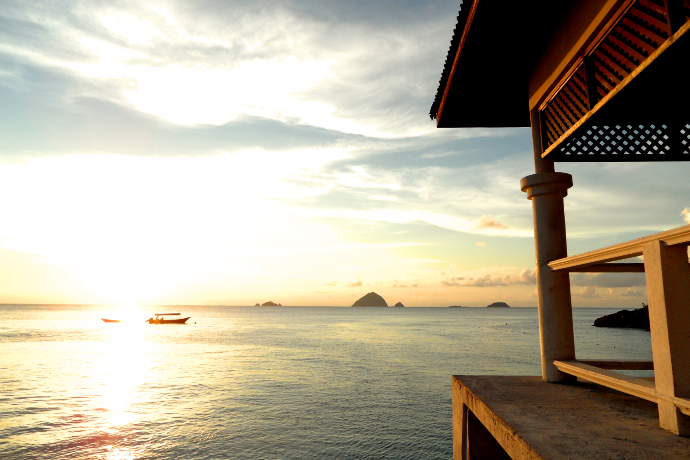 Malaysia isn’t exactly a gay-destination. One would expect a bit more from a country that is proud of it’s natural diversity. But as always religion screwed up here. Nevertheless there is a nice piece of paradise to be found. And I’m not the only gay guy who discovered that…

I’ve been traveling around Malaysia for a bit more than a week now. It truly is a paradise: jungles with monkeys and other exotic creatures, beaches, delicious fruit, caves and amazing places to snorkel and scubadive. Though most gay guys wouldn’t consider backpacking as the best way to travel, for me it’s always a nice adventure. Not knowing where I’ll go next is exciting and takes me to places I didn’t know existed. Perhaps if I had done my homework I would have known where all the western gays go in this mainly muslim-country. But somehow I discovered that little paradise anyway.

For sure this is not a country where you can walk hand in hand with your boyfriend. But if you want to visit paradise you might as well adapt to the Adam & Eve-part of it. Malaysia has a lot of good quality hotels if you aren’t the backpacking type of guys. But if you end up at the beautiful island of Kecil you might not want to bring a trolley, unless you have one that knows how to deal with the sandy beach. That said: the Shari-La Island Resort is located right next to the jetty, so just take your suitcase/backpack/trolley up for a few stairs and get reasy to relax after that excercise.

Welcome to the Perhentian Islands

The Perhentian Islands are located in the sea along the northeastern side of peninsular Malaysia. From Kotha Baru or Kuala Terrenganu you travel to Kuala Besut (by taxi or bus) and from there you can take the speedboat to the islands. The larger island is called Besar and home to a lively backpacking crowd. Also families like to go to this island. The smaller island is called Kecil. It has several beaches and stops for the speedboats, but if you want to go to the place where the men reside, make sure you are dropped off at Coral Bay. From there its just 2 minutes to the Shari-La Island Resort. It’s a beautiful place with a nice restaurant as well. For a bit more authentic experience you can have (BBQ)diner at Mama’s Kitchen, Amelia or Fatimah. Skip Ombak, which is overpriced for what you’re getting: staff is mainly interested in the movies shown on the big screen and not as much in who actually wants to pay for eating and drinking there.

The Coral Bay beach is small, but it’s easy to book snorkeling trips, scubadives or massages. If you want to go to a more lively part of the island, you can walk easily to Long Beach. Here you’ll find a lot more beach and organised daytrips and funactivities. Therefore you will also meet more (mainly younger) travelers.

There is no gay-life on Kecil. That is not surprising as you will not find anything like that outside Kuala Lumpur. Nevertheless a lot of gay travelers seem to head out to Kecil. Just keep your eyes open and see the subtle flirting going on. I spotted a lot of gay couples on the beach and in the restaurants. It is a weird experience: everyone knows who’s gay but nobody is acting upon it. Maybe that is the real charm of Kecil: it’s like an innocent paradise for those who want a break from the real jungle.