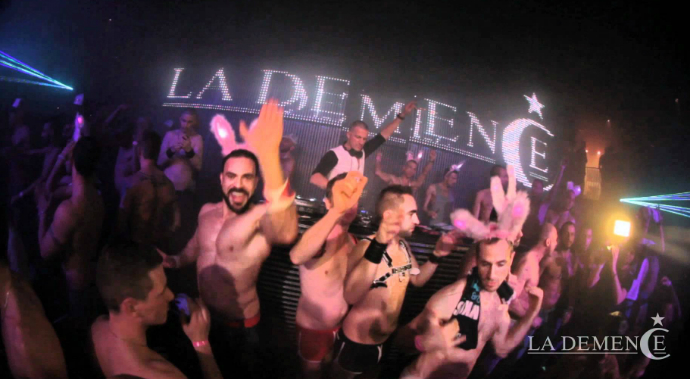 This monthly party in Brussels is for the beefy, scruffy, sporty, leatherish guys. Well, in fact, it’s for all guys who like guys. La Demence takes place in club La Fuse which is not exactly in the best part of town, but once you’re in it’s easy to forget. With two floors with pumping beats plus a smaller bar and a smoking room, men without shirts (you can count this guys with their shirt on the fingers of one hand) and a lot of space to play around you can imagine that it’s getting hot in Belgium. That’s probably the reason why even in this cold summer of 2012, they named the July-party ‘HOT’. And yesterdays SUMMER-party wasn’t a cooldown either…

Where most gayclubs or parties for this audience can get too big, La Demence kept it’s atmosphere of intimacy. I cannot describe why that is, but in a way it feels more relaxed than other parties of this kind. The La Demence Cruise is supposed to be likewise and therefore still on my bucketlist. But for now it’s good to have the parties scheduled in my agenda. And yes, I admit, I am taking one of my DIRTY TOMs with me, because you never know if it’s just sweat you’re feeling…. 😉 (update: in March 2013 I decided to closedown the DIRTY TOM-webshop. The cumtowels and gymtowels are now only available on request. More details: tom@thatguyfromrotterdam.com).

Update (april 2014) : Not convinced yet? Check this video about their anniversary-party last winter!